A update to Fire In The Pipe 2 have just been released. 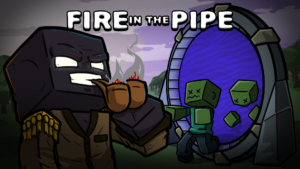 This update is rather large. It adds MouseTweaks mod, updates some mods that adds lots of new content. GregTech is getting a huge update, which adds new MultiBlocks like the AssemblyLine but also polution and much more. Oh, and TinkerConstruct Tools can now despawn and get destroyed… Sooo expect much more salt 😛

(Info for server owners: mods, config and script folder have been changed)

Nerfs/Changes:
– You now need a Shard Of Creation to make a Twillight Portal
– TinkersConstruct tools/weapons can now despawn and can be destroyed. So be prepared to loose your beloved tools >:)
– Edited the Twillight Portal quest, to now mentions you need the Shard Of Creations
– Fixed GT Shutter Module Recipe @ Thanks kojul
– Updated BetterTitlesScreen to mention Beta 4 (forgot to do that to last update)
– Added recipe for Clear Glass

(Info for server owners: mods, configs and script folder have been changed)