A very large update to Crundee Craft have just been released on the  ATlauncher. A lot of bugs have been fixed, but also a lot of new stuff have been added. Servers may need to do a /fml confirm when starting. Clients can just hit “Continue” if using a old world.  Be sure to make a backup of your old world before updating. 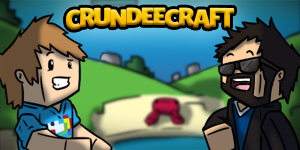 You can read the full changelog here:

Updated BiblioCraft v1.11.2
– Added a config option to disable recipe book crafting
– Added a config option to force books added to the typesetting table be either public or private. Private by default.
– Fixed a crash with the Stockroom Catalog when trying to add a block inventory that doesn’t have an inventory name.
– Fixed a crash with Framed Chests when certain items / blocks are placed inside the chest
– Fixed a crash with the framed chest and certain items such as the botania wand of the forest
– Added support for the Storage Catalog to the printing press
– Added support for the Quantum Storage Unit mod to the Stockroom Catalog
– Fixed a bug that forced graphics to fast mode when using a framed chest
– Fixed TFC support for BiblioWoods TFC
– New Block: Framed Chest – Works with the Furniture Paneler to get to color chests using any solid block. The Framed Chest also has a built in single item label that automatically shows the item with the highest quantity in the chest. Chests can be connected into double chests using the screw gun. Double chests will have 2 built in labels and the left side of the chest will select its label item from the top half of the chest inventory and the right side will select from the bottom half of the inventory.
– New Item: Stockroom Catalog – This allows you to list the contents of any number of chests with a single list. Sneak right-click a block with an inventory (a chest, bookcase, barrel, anything with an inventory) to add that inventory to the list of inventories for the catalog to keep track of. Sneak right-click the same block again to remove that block from the list. A small particle effect will render on that block when holding the Stockroom Catalog to let you know that block is being tracked. Right click to open the GUI and see the list. You can sort the list in ascending or descending order by quantity (Count) or alphabetical order. Click on the title to change it to anything so you can custom label your stockroom catalog. click on the small chest icons on the right hand side of each listing to open the inventory list view. This shows you everywhere inventory in your list that item can be found. You will notice 8 slots across the top. If you have any waypoint compasses in your inventory, they will show up in those slots. This allows you to click the compass, then click the + button next to an inventory and add that location to your waypoint compass. Click the close button on the bottom right or hit ESC to close the inventory list view. Hit the exit button on the bottom right or hit esc again to close the GUI.
– New Feature: Fancy workbenches connect to bookcases. Up to 2 bookcases, one on the left and/or one on the right will show their inventory in the fancy workbench.
– New Feature: Recipe books can now be used to craft items without a workbench if the player has the required ingredients in their inventory.
– Clipboard tweak: Can now navigate between lines using the arrow keys and can enter the next line by hitting enter.
– Added a locked message to blocks that have been locked with the lock and key when another player tries to use that block

Updated Buildcraft 7.0.25
– A lot of bug fixes and tweaks. Too many to list here.

Updated Chisel 2 – 2.5.1
– Fixed the console spam and for those who didn’t grab the reupload of 2.5 it fixes that crash as well

Updated InventoryPets-1.7.10-1.3.3
– Legendary Pets no longer craftable by default (doh)
– Major exploit fixed. Not even going to say what it was, it was so bad. (the shame)
– Players walk (levitate) closer to lava/water when using Magma Cube or Sponge (credit: @TheProMilkman)
– Cloud Blocks and Spawners now officially harvestable with a Diamond Pickaxe (and up) with Silk Touch (credit: @Jayg3r, MichaelTon, and aaronkatz123)
– Loot Pet no longer works on other players (credit: MrWisski, Leonyx1175)
– Jukebox Pet now makes a sound and stops working when hungry
– Added new messaging for Nether Portal (patience is a virtue)
– Added ability to remove Sponge Water Absorb in config (credit: I didn’t write it down!)
– Changed Coal Nuggets recipe to make 8 nuggets instead of 9, to make it consistent with its fuel value (credit: IANNOVA)
– Extended effect timer on Moon
– Lowered cooldown on Shield and Heart

(Info for server owners: mods and config folder have been changed)