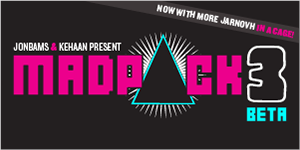 I have decided to save all the changes that is being done to MadPack 3 Beta 4 in one place. This post will be updated as soon as new changes is being made to the update. All further beta version and updates to the pack, will get its own post here on this blog.

As with all updates, you will most likely require a new world.

Updated BamsDongles-1.7.10-0.0.12
– Added “Get Caged” a block that will create a 25x25x12 Cage when break. Can be removed right clicking it with a Sponge on a Dongle
– Created new Enchantment “Bamily Love” (Should not be available via normal enchantment)
– Bamily Love has a 1 in 1000 chances to drop a Bam-TShirt when mining.
– Pickappa (Only the iron one) comes pre-enchanted with Bamily Love.
– Pickappa 123 can place torches (if player have them on inventory) with right click. (Needs some minor fine tweaking)
– Added “Bamskin Donut” (Same as Ultra Bams Apple but no EMC) (For quest reward)

Updated Chisel 2 – 2.5.0
– HotFix for the ClassCastException with the GUI

Updated Decocraft-2.1_1.7.10
– Added 50+ models, did some renderer optimization!
– Better, faster, stronger rendering. Everything is based on VBOs, triangle strips and magic. The rendering is completly GPU bound and not CPU bound anymore. Perfs, perfs, perfs. + The renderer itself is a new wip mod included in this release (PTRModelLib). If you want to desactivate the outline when looking at a model, check out PTRModelLib.cfg. + Shift clicking will ignore the bounding of other models, allowing you to place models within models. + Glass and snow are not blocking placement anymore. + Fixed potential problem with fake tileentity badly casting.
– Fixed a proxy issue that prevented placing materials in the Decobench.
– Fixed missing texture parts bug.
– Shorter loading time (cut down by 30s) by temporarily removing startup mipmaps computation. Mipmaps will be re-added once it can be done in an efficient way.

Updated Dimhub 0.0.13
– Injected CandyCraft as 2nd Dimension. All the other dimensions moved 1 room.
– Killing Jelly King (KingSlime) on Dimension 24 (The Dungeon) will unlock the 3rd dimension
– Investigate why trying to get back from end to hub fails
– Removed recipe of the Item teleporter
– Added new blocks for the frames of each dimension
– Medals now replace the “Item Teleporter”
– 6 Medals, one for each Boss beaten.
– Item Teleporter still in game, can only be obtained on Creative Mode (Just for emergencies)
– Now the reward is not put on players inventory, but spawned at theirs positions (If inventory was full, they didn’t got the item)

Updated MobProperties-1.7.10-0.4.1
– Compressed schematic files can now be read (probably the majority of schematics you will encounter).